Own a piece of Trish-tory: Trish's in-ring debut outfit will be up for auction!

UPDATE: Auction will be delayed until further notice. Please continue to check back for new bid date.

As Trish's 20 year anniversary of her WWE debut approaches in mere weeks (#TSXX), we are giving one lucky Stratuspherian the chance to become the owner of Trish's ring attire from her very first wrestling match!

Stratusphere Shop has acquired the snakeskin one-piece outfit worn during the June 22nd, 2000 edition of SmackDown! that saw Trish Stratus & T&A take on Team Extreme. This was the first in-ring showdown of what went on to become the now infamous rivalry between Trish Stratus and Lita.

The outfit also appeared in the pages of MuscleMag prior to WWE. As well, the jumper was featured in the classic No Mercy N64 video game.

Own a piece of Trish-tory with our Anniversary Auction. Bidding will open Thursday, March 19th and lasts through Sunday, March 29th. 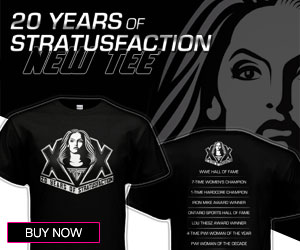 This isn't the only piece of attire Stratusphere Shop has acquired... stay tuned to TrishStratus.com for other opportunities to get your hands on the WWE Hall of Famer's plethora of ironic looks.